Posted on September 17, 2012 by DumbOx in Uncategorized
“Following Jesus means taking up one’s cross and walking in his footsteps, along a difficult path which leads not to earthly power or glory but, if necessary, to self-abandonment, to losing one’s life for Christ and the Gospel in order to save it. We are assured that this is the way to the resurrection, to true and definitive life with God. Choosing to walk in the footsteps of Jesus Christ, who made himself the Servant of all, requires drawing ever closer to him, attentively listening to his word and drawing from it the inspiration for all that we do.” Pope Benedict XVI – 16 September, 2012 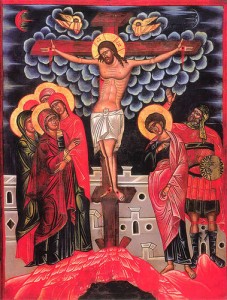 Posted on September 17, 2012 by DumbOx in Uncategorized 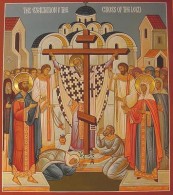 As in the Latin Rite, one of the Great Feasts of the Eastern Rite, the Universal Exaltation of the Precious and Life-creating Cross, also known to be the Exaltation of the Holy Cross, commemorates both findings of the true Cross. First is in 326 A.D When Empress Helena, Mother of Emperor Constantine, discovered it in Golgotha after an Ailing Woman was healed and a Dead man given his life after the Cross was put to him. The second is when the Cross was returned in 628 A.D by the Byzantine Emperor Heraclius after it was stole by the Persians, Legend has it that when he insist on carrying the Cross back to Jerusalem, he felt a heavy burden at the very entrance of the City Gates. But when he removed his Crown, it weight becomes miraculously light as the Gates was opened. In the Eastern Rite, this day is also a day of fasting and repentance. For the feast, the Cross is place on a tray surrounded by flowers or branches of Basil, a flower which was believed to be found at the very spot where our Lord Jesus Christ is Crucified, and placed in the center of the Church to be venerated by the faithful.

Hymn to the Elevation of the Holy Cross

O Lord, save Thy people, And bless Thine inheritance. Grant victory to Thy people over their enemies; And by the power of Thy Cross Preserve Thy habitation.

Before Thy Cross we bow down in worship, O Master, and Thy holy Resurrection we glorify. (Thrice)
Glory to the Father, and to the Son, and to the Holy Spirit, both now and ever, and unto the ages of ages. Amen. 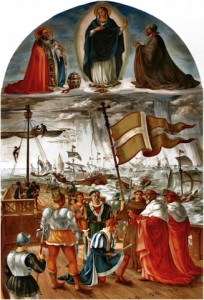 For information on purchasing tickets for the dinner, and for additional details,
please visit the Knights of Columbus Latin Mass blog.

(Hat tip to our friends at the Knights of Columbus Latin Mass blog for bringing this to our attention.)

More details as they become available…

Apropos of the mission of the PLMC…

Co-responsibility requires a change in mentality, particularly with regard to the role of the laity in the Church, who should be considered not as “collaborators” with the clergy, but as persons truly “co-responsible” for the being and activity of the Church… always in cordial communion with the bishops. Pope Benedict XVI, 24 August, 2012

Excerpt from a Message addressed to the participants in the International Forum of Catholic Action, taking place in Iasi, Romania. Read the entire article here…

Come meet, listen, and discuss Catholic Identity in the reign of Pope Benedict XVI with the foremost traditional Catholic thinkers in America.

Posted on July 31, 2012 by DumbOx in Uncategorized

Fr. Jonathan Romanoski, FSSP will be visiting the Pittsburgh area in August. His schedule is below.

All are invited to attend Fr. Romanoski’s Masses while he is in town.

Posted on July 26, 2012 by DumbOx in Uncategorized

As you all know, I was sent to Madrid where I had been assigned since September of last year. Not only has it been an opportunity for me to discover the magnificence of Spanish Catholicism – its venerable customs and its rich tradition – most importantly, my apostolate assignment provided insight into my life as a priest in the Institute of Christ the King.

Whether it has been at the seminary or at an apostolate, each year of priestly formation crystallizes my calling to the Holy Priesthood. My desire to serve the Church remains ardent and God continues to guide me toward this sacred vocation. As Divine Providence has determined now, my vocation leads me rather to the diocesan priesthood. Consequently, I will be finishing my studies as a seminarian for the Archdiocese of New York.

I assure all of you that this was not a hasty decision but rather one that was carefully made after much prayer and reflection. With the consultation of my superiors, I was encouraged to see whether the diocesan life was more suitable for me than life as a secular canon in the Institute. It was indeed a very difficult decision yet Our Lord only kept the door open, waiting for me to respond.

Even if Our Blessed Lord calls me to serve as a diocesan priest, my formation in the Institute was nevertheless according to His divine will. It was neither a mistake nor time wasted because God willed it. Whether as a member of a religious community or of a diocese, I am satisfied wherever His divine will indicates me to serve Holy Mother Church.

May God bless you for your support for my vocation. With the assurance of my daily prayers and my devotion, I remain,

The Board of Directors and Members of the PLMC, Inc. wish Eddy the best and will keep him in their prayers as he continues his journey to the priesthood.

Posted on July 18, 2012 by DumbOx in Uncategorized

Our congratulations to Fr. John Berg and the following Priestly Fraternity of St. Peter priests on their election to the following positions:

The General Chapter of the Priestly Fraternity of St. Peter (FSSP), gathered from July 3 to July 18, 2012 at the International Seminary of Our Lady of Guadalupe, Denton, Nebraska, in plenary session elected Fr. John Berg as Superior General for 6 years. This election, at which the 33 capitulants were present, took place on July 9. The Pontifical Commission Ecclesia Dei was immediately informed and sent a congratulatory message. The election of the Assistants and Counselors will follow in the next days.

An American priest born in 1970, Fr. John Berg studied philosophy at St. Thomas Aquinas College (California, USA) and theology at the International Seminary of St. Peter in Wigratzbad (Bavaria, Germany). Fr. Berg holds a licentiate from the Pontifical University of the Holy Cross in Rome. Ordained a priest in 1997, Fr. Berg taught as a professor at the International Seminary of Our Lady of Guadalupe (Nebraska, USA) from 1999 to 2000. Afterwards he exercised his ministry from 2000 to 2005 at the FSSP parish in Sacramento (California, USA), before being appointed again as professor at Our Lady of Guadalupe Seminary. In 2006, the FSSP General Chapter elected him Superior General for a first term of office. The Chapter reelected him on 9 July 2012 for a second term of six years.

Posted on July 7, 2012 by DumbOx in Uncategorized 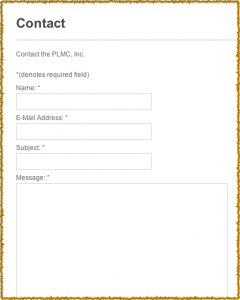 We’ve added a Contact form to our site. Please use the “Contact” links at the top of the page or in the sidebar to contact the PLMC.