Posted on July 4, 2012 by DumbOx in Uncategorized

I just received the religious items and cookies from you. I wanted to thank you for your kindness. A great treat! I am currently in Kabul, Afghanistan and any taste of home is appreciated.

Posted on July 2, 2012 by DumbOx in Uncategorized
The Second Vatican Council declared, in relation to all liturgical rites approved at the time, that the Church “wishes to preserve them in the future and foster them in every way.” (Sacrosanctum Concilium, #4) It was during Vatican II that the 1962 edition of the Missale Romanum was published, which is the Missal still used today for the celebration of the ‘Tridentine’ Mass.

The liturgy of the ancient Roman Church emerged from the times of intense persecution and today, as Christians are more and more persecuted for their Catholic faith, they are attracted to the ancient Mass which helped to evangelize a world that has turned its back on Jesus Christ. As the Catechism of the Catholic Church succinctly says, “the liturgy itself generates cultures and shapes them.” (CCC, #1207)

…above from the SanctaMissa web site

The PLMC Board of Directors, at its 26 June, 2012 meeting, unanimously approved the following: 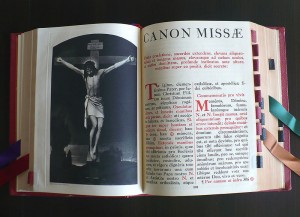 Posted on June 25, 2012 by DumbOx in Uncategorized

June 23 marked the 50th anniversary of Blessed John XXIII’s promulgation of the 1962 editio typica of the Missale Romanum. Rorate Caeli is planning to run a series of posts in the coming weeks dedicated to the 1962 Missal. Below is the introduction to the series… 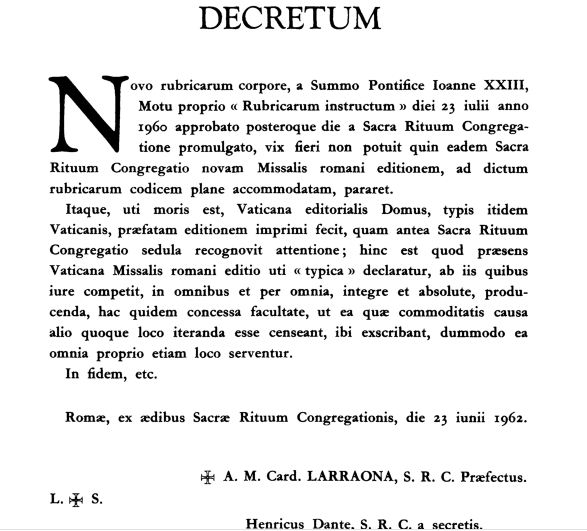 The Decree of the Sacred Congregation of Rites establishing the 1962 edition of the Missale Romanum was promulgated exactly 50 years ago today: June 23, 1962, a few months before the opening of the Second Vatican Council and with all rubrics and classifications fully aligned with the Codex Rubricarum promulgated along with the motu proprio Rubricarum Instructum of 1960…

Read the rest here: RORATE CÆLI: 50 years of the 1962 Missal The actual Mass of the Council.

Posted on June 14, 2012 by DumbOx in Uncategorized

Canon Moreau chanting the Gospel
Click the picture for a gallery of images.

A Requiem High Mass was offered on Friday, 8 June, 2012 Canon Jean-Marie Moreau, Institute of Christ the King Sovereign Priest and rector of St. Anthony of Padua Oratory West Orange, NJ. The Mass was offered for the repose of the souls of the deceased pastors of St.Titus and was sponsored by the Knights of Columbus Woodlawn Council. The PLMC, Inc. provided vestments and other necessary items for the Requiem.

Long-time PLMC member Dick Valletta was the organist and cantor – ably assisted by Ralph Ruggiero. After Mass a dinner was enjoyed by many of the participants and attendees, who had the opportunity to meet informally with Canon Moreau and learn of the activities of the Institute.

The first item of business on the agenda for the May Board of Directors meeting was the authorization for the offering of two Novenas of Masses.

The Board unanimously requested that nine Masses be offered for the temporal and spiritual well-being of Fr. James Dolan, Chaplain of the Diocesan Latin Mass Community at Holy Wisdom Parish.

Nine additional Masses will be offered for the temporal and spiritual well-being of Fr. Kenneth Myers, the outgoing chaplain. All Masses will be said by priests who support the PLMC, Inc. in its mission to promote the Traditional Latin Mass and sacraments.

The PLMC, Inc. provided acolyte vestments for all those who requested them and who took part in the recent Rosary March through downtown Pittsburgh. Special thanks to Mr. and Mrs. Robert Medvitz for their careful laundering and ironing of the vestments, to Mrs. Young for distribution and collection of the vestments, and to Mr. Nypaver for the use of his photos of the Rosary March.

Thank you for an outstanding Emperor Karl event! The liturgy, planning, food, and people were all wonderful and first rate. I am very grateful for the hospitality I received. I am also grateful for your donation to the League of Prayers. It comes at a time when I need to print more holy cards so it comes in very handy!

All the best,Brother Nathan Cochran, O.S.B.

Posted on May 1, 2012 by DumbOx in Uncategorized

A Traditional Latin High Mass in honor of Blessed Emperor Karl of Austria was celebrated on Sunday, 29 April 2012 at Saint Titus Church, Aliquippa PA – sponsored by the Knights of Columbus Woodlawn Council 2161 Traditional Latin Mass Guild. The celebrant was Canon Jean-Marie Moreau of the Institute of Christ the King Sovereign Priest. The PLMC, Inc. provided logistical and liturgical support.

The Honorable Dr. Jan Napoleon SaykiewiczHonorary Consul of the Republic of Poland

Seminarians of the Diocese of Pittsburgh

Treasurer Mr. Tom Oxenreiter presenting Canon Moreau with a $1000 donation from the PLMC Seminary Fund to assist the the Institute of Christ the King in training future priests.

The Duquesne University Schola Cantorum Gregorianum under the direction of Sr. Marie Agatha Ozah, HHCJ and organist Dr. Ann Labounsky provided the music for the Mass.